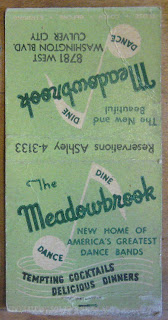 Another one the greatest ballroom's which so many have mentioned over the years
in their interviews. It was owned at one time by Harry James, before Tommy and Jimmy Dorsey took it over in the 1940's.
Posted by the Jassdancer at 1:09 AM