The Jitterbugs are back! 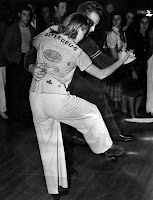 One of the The most misunderstood terms and commonly asked questions I've come across in my travels, "What is a Jitterbug"?

It doesn't matter where the term came from, and it doesn't matter how it came to be, at least not in this writing. What does matter is it was....and even to this day is being thrown around in various ways.

Unfortunately, the answer of "what is a Jitterbug" really is not that easy, unless we take a closer look back in time. The time and era i draw my answer starts in the 1930's during the swing era when Bands played for dancers, and these dance bands were at the height of being popular music.

The best example i could site would be a newspaper clipping from Los Angeles advertising a contest in 1938 at the Paramount Theater.

In Bold letters it said "JITTERBUG CONTEST" and then under that it said, come see the The Shag, Truckin', The Lindy Hop, Randy Swing and the Susie Q!
The simple truth is Jitterbug was not a dance at all but rather an umbrella term used to label hardcore enthusiast who were normally in heir teens, but of course not always.

It was these teens that lived the popular music, by that i mean collected the records, bought the magazines, got autographs, danced until they dropped and converted their parents to listening and even dancing to their generations music. Which was different to their Parents generation and would be different the following generation.

Something I've come across in various interviews was how the Jitterbugs were looked upon by not only the public but also musicians. Many musicians embraced or at least respected these kids for their overall knowledge of knowing who was playing in what bands in what cities, something musicians simply didn't have time to do, and commonly didn't find it always important. One such player while on tour not knowing were a fellow friend and musician was playing kneeled down to the edge of the stage and asked a group of dancers "hey Kids, do you know were is Krupa playing right now?" to which they replied "They just hit Atlantic City!"

Of course, it goes without saying not everyone liked "The Jitterbug" for them it meant a reckless teen hell bent on smoking reefer and ditching school, and at one moment in history one of the greatest band leaders in history came out and called them "MORONS" , unfortunately Artie Shaws comment was taken out of context, and in response to the activities surrounding that nights Concert.

That night while in the height of his Big Bands Popularity, this being while Buddy Rich manned the drums a group of his fans outside like a frenzied group of piranha's cut up the new convertible top to his car and wrote all over his vehicle, destroying the paint job as well, while inside the Ballroom one Fan jumped from the second balcony breaking their leg, and lastly one Dancer so entranced by the music jumped on stage and accidently kicked Artie's Clarinet which in turn jammed the mouth piece into his lip. So backstage, when the Newspaper reporter "So what do you think of these Jitterbugs?" the response could be none other. Artie regretted his answer later, and recounted in interviews and to myself, that he truly enjoy dancing, and like music , he enjoys great dancing and great playing however most are not great. 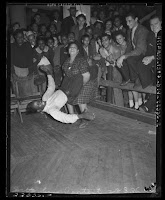 What did the Jitterbugs think of this term, that the media deemed onto them? Well, this depends once again. Some dancers, who were very serious hated it, and went so far as to dismiss it as a racial term, That Jitterbugs were nothing but white kids who couldn't dance. While this person's belief might have in fact always been their opinion, we know it isn't true from the information, photographs and articles we have today. Check out how many white kids danced in Jitterbug contest from the 1939 movie "Keep Punchin". None, what we see are Jitterbugs from the famous Dance Troupe "Whitey's Lindy Hoppers" doing a dance called "The Lindy Hop". One of the dancers in that Scene Frank Manning, would agree, while another Norma Miller would quickly exclaim "We were not Jitterbugs, we were Lindy Hoppers!", now i too was confused.

So I went on speak to Venna Archer who one of the legends of dance on the west coast about the term. She simply accepted the term and stated "some dancers might disagree with the term to try and feel more important then everyone else by calling themselves something else, Like a Shag dancer, or Lindy Hopper, that's just them sticking up for their dance but like it or not, that's just what we were, Jitterbugs".

After the War the styles of dance began to become slightly more homogenized as the temperament around the dance floors changed, and slowly the media and other "removed sources" started to call the dance it self "The Jitterbug" , one such moment was when the Daily News changed the division name in the Harvest Moon Ballroom in 1943 from "The Lindy Hop" to "Jitterbug/Jive" , why this was done we will really never know, but possibly to give them the benefit of the doubt was to include all types of dances being done to uptempo dance music. Regardless, we began to see the trend of dance and instructional books start including lesson's in Jitterbug. From here the term takes directions, and new definitions....forever, loosing it's origin.

For one moment during the 1950's one Los Angeles paper got it correct, with an article and photograph of George Christopherson doing his trademark move of doing a front flip onto his back with his then partner Freda Wycoff with the Caption reading: "The JITTERBUGS ARE BACK!" 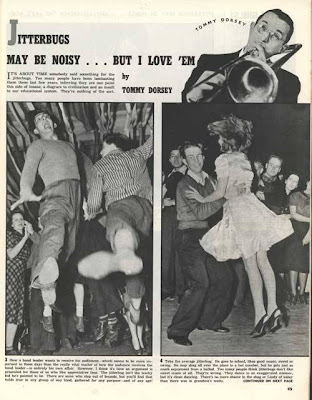 Posted by the Jassdancer at 3:24 PM