What is this dance all the kids are doing today called Collegiate Shag?
where did it come from and what is it's history?

The truth is the history is very spotty, very little documentation and to make things worse the term "Shag" has come to mean many unrelated dances just like the term Jitterbug.

One of most popular dances in the United States today is called Carolina Shag, or too many in that region just Shag. To make things more complicated the city of St Louis, has it's regional dance called St Louis Shag, that traces even further back into the 1930's, but again to the dancers it's simply called Shag.

The enormous popularity of the Carolina Shag over the past couple decades, has caused enthusiast to try and research it's history and, all it seems have made the mistake of relating the "Carolina Shag" of today with the Shag done previous to WW2, done by the dancers who made the Big Apple famous.  However, before we get into that lets start with square one with the term Collegiate Shag.

The Term Collegiate, was simply a descriptive term used to explain who, or the way a dance was done. for instance Collegiate Waltz, or Collegiate Fox Trot, simply put, this was the way the College Kids did the dance.

This style was not tied to any studio standard or structure but rather to whatever they felt was the way. This could be consider a rebellious type of dance, but not so much in that they just had their own way which was or could of been the trendy way to do it. Different schools had there way to do things and this is what set them a part, the College set.

So now, we just have Shag. where does this word even come from? well, I know the word is in fact used in a 1890 book with the definition being a Vaudeville Performer. This definition of the term Shag continued to be used all the way into the 1920's, however it's definition changed to be more specific describing Burlesque acts, and not just any Vaudeville performer.

One of the most knowledgeable historians in this field is Lance Benishek. He reminds us that these Vaudeville Performers did a step called the Flea Hop which consisted of a Step Hop which alternated right to left, and that is one of the possibilities.


Just as possible, i recall doing a performance Turkey Trot at a large camp in Sweden, and the legendary Norma Miller who started dancing at the Savoy Ballroom in Harlem during the early 1930's, told me it was were the Shag came from.

Let's put all this Term History to rest for a second and let me introduce to you the first use of the Partner dance called "The Shag" .

I found a Book called "Land of the Golden River" by Lewis Phillip Hall. During the Winter of 1927 he came up with a dance routine called "The Shag", Lewis introduced this in august of 1928 in Wilmington at the Pirates Festival. Then in 1930, Kay Keever who was married to the Band Leader Jelly Leftwhich who played at the dances remembers singing in his band and jumping off stage to dance the Shag with Lewis Hall, and backs up Lewis claim that he was the one that invented the dance.

July 25th, 1929 (Blytheville Courier News, Arkansas)
Virginia Beach, VA. Sun back bathing suits and beach pajamas are the costume, the sands are the dance floor and the fastest time know to the terpsichorean art. The tempo for "The Shag" is the latest test for the energy of the southern colonist. While classified as a dance, the Shag essentially requires energy rather then grace. It apparently is the embodiment of all the movements of Highland Swing and the late Charleston.  Unlike the Charleston, the feet of the dancers not lifted.

Although, in the south there were contest every summer at the Ballrooms starting in 1929, there was no mention until 1932.

July 22,1932 (Ironwood Daily Globe)
When the convention of dancing teachers opened at the Hotel New Yorker recently, an announcement was made that the Lindy Hop remained an outstanding ballroom dance. During the several days which elapsed, someone must have gone over the more recent dispatches. Toward the final session the statements read that the Earhart Hop would be "the thing".
This Winter the Shag at eve will have it's fill. The teachers have decided upon the Shag as one of their favorite dances. I'm told that it's a mild form of Tango and an improvement on the shuffle. Well the milder the better, so far as I'm concerned.

Is this the same Shag dance being done today or called the Collegiate Shag today?

No, it's not, but it was the original Collegiate Shag, and it was from the Carolinas. 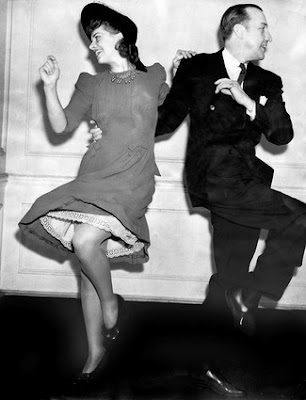 Somewhere along the Lines, Dance studios started using single, double and triple Shag, to separate the styles but i think it just made things more confusing. I'll explain why as i go along.

The Collegiate Shag of today is commonly refereed to as "Double Shag". The Double consist of a step and Hop on your left, and then a Step hop on your right this takes up 4 beats of music, and then a step-step , or left right which is 2 beats of music completing the 6 beats of music. You can also simply say slow-slow-quick quick....to achieve the same timing.

Now to do the triple Shag, you simply add a Step Hop, making 3 step hops, before doing the quick quick.Triple Shag however can also mean adding "triple steps" to any basic shag, which is a syncopated 3 steps within 2 beats.

i can think of 3 basic's that fall under the term Single Shag. 1)  you start with a Step-hop , quick quick which is 4 beats, and then you do the same thing starting on the other foot, step-hop quick quick. completing the 8 beats of music. 2) step, step, step-hop...and then alternate starting on right, step, step, step hop. 3) last is same as Cat step, Balboa, Jig Trot step and hop on 2 and 3.

So the Terms single, double, triple simply add confusion to a set of dances, that already have names which are separated by regions. these could all be considered Collegiate Shag, even though they are different dances done in different area's of the country during the Swing Era.

One of the most famous film clips of Shag is no doubt Arthur Murray teaching the Shag in 1937 with his students and performers. How did he find the dance? well, it goes back to a dance called the Big Apple, and the original Big Apple dancers who all did the Shag, the Southern Version or single Shag. This was their swing dance, and what they did when they "Shined" or went into a circle to "Jam". 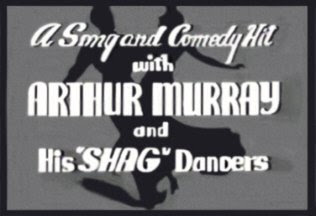 Upon their arrival to New York with the National Popularity of their Big Apple dance, Arthur Murray and one of his pupils Tom Gallagher took a trip to one of the most popular Collegiate Ballrooms called the Club Fordham. Upon their arrival they discovered an entire crowd of Shag Dancers, all doing the dance which we are discussing in this article. Well, it didn't take long for Arthur Murray to recruit dancers and a month or two later to come out with the Video we know of today.

So that's it? 1937? nothing earlier for this 6 count Shag? well, not necessarily so. A dancer who i came to know as Connie Wiedell, who's real name was Conrad, brought this dance to Los Angeles in 1935, and I've know a quite a few dancers that remembered that moment very well, as he first pulled up in his green Cord automobile. He became very famous in the Los Angeles dance scene as being a Shag dancer and appeared in films during the swing era, not to mention he taught a lot of dancers and it became his "Style" or "Look" of Shag that would forever become famous for being used in Cartoons.

Connie was from Minnesota, and was working in a theater in 1934 when he learned to do the Shag from some professional dancers. These dancers were on tour doing a dance called the Peabody. On his way to Los Angeles he thought he would call the dance "Chicago Shag" to make is sound more exciting and also accepting with the new dancers he would be coming across, however, thankfully that term never stuck, which would have confused history.

The dance simply became a "step" to use in their Swing dancing, such as Maxie Dorf, Ricky Birch, Fred Christopherson, Hal Takier, and even Dean Collins. One of my favorite clips is in the movie Cabin in the Sky with Duke Ellington's orchestra. Ricky Birch who was Connie's roommate at one time, comes in the Club and Jumps over a table with his partner before going into the Shag.

Today most dancers look at Connie Wiedell who dances in the beach clip (1940), Freddie and Betty Christopherson in 1937 adding Shag into their Swing, also Ray Hirsh and Patty Lacy in Blondie Meets the Boss (1939) and Mad Youth (1940). Also, there are some short clips of the Harvest Moon Ball which was held in Madison Square Garden, between the years 1936 and 1939 it had a Shag division, lastly, as mentioned before Arthur Murray's Instructional Video comes to mind as a great source, followed by Vitaphone shorts with Artie Shaw, and Woody Herman.
These are just a few of the clips that have become famous for today dancers.

I know, it's one of those dances that almost just seems to appear out of now where, becomes the most popular dance for kids for a few years and then disappears.
Obviously these kids in their saddle shoes who laid claim to doing this dance grew up and learned sophistication in dance was more important then hopping around the floor, that and the music they loved took a back seat to new music forms that did not fit the swing mold.

My personal opinion is the dance came from Turkey Trot which was a basic step for the Tommy dance as well. We know from film this dance was based on a step hop, step hop, when the quick quick came in we don't really know, however during the teens the two step and fox trot became a huge hit across the country which at least explains the possibility of added a variation of timing, which here means adding a quick-quick or step step alternating feet. In the Turkey Trot we see the same posture, same turns and patterns. The earliest i have this on film is 1914, however oral history of interviews puts the dance at least 5 years earlier. It was Al Jolsen that discovered these dancers and brought them from San Francisco to New York around 1914 which helped spread the dances popularity on both coast.

anyways, this is my research and look at the dance which has become more popular in the last few years. Although, I started doing it over 10 years ago after discovering the Arthur Murray clip and practicing with friends, Learn as many steps from old timers, and spent unknown hours with Connie Wiedell. It seems to have recently had a small revival, with Shag weekends slowly popping up around the world. In the late 1990's we had Shag Contest all around Southern California which was real fun, but it didn't seem to last long, as most dancers were interested more in Lindy Hop, Swing, Charleston and Balboa. However, there were those countless nights in the back room of the Derby in Hollywood of all of us Shag dancers going off and Jamming! Imagine that on a regular night out....those were the days! 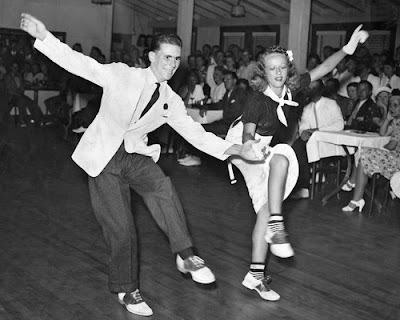 Posted by the Jassdancer at 1:50 PM