So You wanna dance fast?

One question that always comes up when teaching, is how to dance fast.
Dancing fast was never an issue, or a problem for me, because the simple fact is I dance for fun, first and foremost. In my early days of dancing as a "beginner" , i got up from my chair when the music moved me to do so, regardless of tempo. We never thought in terms of tempo, we just stepped on the floor with our Partner and "went for it" and had so much fun, night after night. I know we were not good in the eyes of a dance critic, however we had no "problem" having fun.

With that all said, my generation of dancers got good dancing fast by doing it over and over, night after night socially. practicing for speed was something we would have never really thought about, and it wasn't until many years later, teaching a class with Sugar Sullivan who mind you was around 76. Sugar is a Savoy Ballroom Dancer and winner of the Harvest Moon Ball in Madison Square Garden in 1955, and in class we were dancing at very fast tempo's, such as Chick Webb's Harlem Congo.

We were teaching a Lindy Hop routine, when one of the students asked to slow it down because she couldn't get the steps. Sugar immediately told her No! That's not how to learn to dance fast, and went on to explain that back in the Savoy Ballroom you never "slowed it down" to practice.

The routine we were teaching as called "Stops" which is not too long, and Sugar basically taught the way they learned back in "her day".  which was having everyone line up, and she would tell everyone what the pattern is, then she would say "Watch!" and she would demonstrate it a couple times, both alone and with me, and with the music...

In some cases she would have the front of the class sitting so the back could see as well, but then it was everyone to their feet, and she count everyone in. It didn't take long before the class was getting the entire routine, and those few students that were having problems she would move forward next her, to make sure they got it as well. We had fun, and at the end of the week we even took our students and invaded another class for a on the spot Battle...Keep in mind this was the first time Sugar had ever taught at the Herrang Dance Camp in Sweden which, which is the largest camp in the world of it's kind. It became common to hear Sugar exclaim "I've haven't done this since...."

Getting back to our students, we eventually discovered was that in many cases it's not a matter of the student learning a piece of choreography, it's the fact they can't dance and move fast enough. One of the great aspects of having routines besides the fact they are something wonderful to improvise on is that they are something you can do to show off your fast dancing. However you want to look at it, when you break into a routine at sizzlin' tempo's it's your muscles you want to explode and take over, allowing your mind to break away and free it's.

The last thing you want to do, is trying to remember steps, with your legs failing to keep up with your thoughts. In Sugars world, it's the opposite, the legs are fast, they think ahead of the mind in rhythm with the music and having already stepped, and kicked before you even thought of stepping or kicking.


Which reminds me of the first time we really danced together. It was in London, and we had been invited, among other teachers as well to teach at a Dance Festival, I remember Chazz Young being another teacher as well as Vicki Diaz, another Savoy Ballroom legend.

One night all the teachers ended up going along with a crowd to the historic 101 club. I don't recall the band but at some point I asked Sugar to dance and it was a slow number, by that I mean uncomfortable to Swing out and start Lindy Hopping. So I kept it simple and rocked in rhythm until the song ended and asked to do another, which she accepted.

When the band kicked back up it was a fast one and immediately a jam session broke out with the dancers making a circle, and one couple entered at a time trying to show off and one up each other in a friendly competition. Sugar in the front of that wall of of people in the circle, with a glowing smile on her face turns over her shoulder to me and says "lets show them how to do it.!!"

Mind you, I had never danced with her until that previous slow blues, and was terrified that she wanted to Swing out and basically Show Off! At this point of my life i was in fact dancing all the time with ladies well in their 80's in Los Angeles, many of which were legends who i could dance very fast with.
However, in Los Angeles we did a dance called the Balboa, which is a very conservative shuffling step in place. The smoother and more conservative the better a Balboa dancer you are, these older masters would always compliment when done right, and correct when done wrong.

Here for the first time in my life, I had a legend asking me to dance Big....and fast! well, to make a long story short we did what we did, and unlike anyone I've dance with, Sugar was killing every step, and each time we whipped out in open, she would kick out a different variation of improvised steps.
Then at the end of a phrase she kept her feet planted and swiveled her knees and and hips, hard from side to side with a swivel motion and the room went crazy.

Sugar was showing us, how she did it, a Savoy Ballroom veteran that was among a group of Lindy Hoppers who localized the Ballroom, and would represent the Ballroom when competing at such major events as the Harvest Moon Ball, which pitted Ballrooms around New York. Ballroom's such as Roseland, and Glen Island Casino would sent their top 5 finalist to the Harvest Moon Ball, and Savoy Ballroom was no different, however taking pride as Home to the Lindy Hop.

Sugar first entered the Harvest Moon Ball representing Roseland Ballroom. She exclaimed she missed the deadline to the Savoy Ballroom's preliminary contest, so headed downtown to Roseland and was able to Win.

She explain at Madison Square Garden the Ballroom teams would first meet with the bandleader to go over the music. Sugar didn't remember specially what song it was the Roseland dancers used, other then a standard popular dance number, but the next thing she remembers changed her life, she remembers watching the Savoy Ballroom Lindy Hoppers hitting the floor dancing twice as fast as the other Ballrooms, throwing airsteps and dancing in and out of routines bringing the Garden to heightened applause.

She told me it was that moment she knew were she needed to be dancing, practicing and spending her time. So from her house, near 125th and 7th ave, she would head to the Savoy and it was not long before she was representing the Savoy Ballroom. The day came in 1955 when she finally won the Harvest Moon Ball with her Husband George Sullivan.

One time I asked Sugar, what does Savoy Style Lindy Hop mean to you? she thought for a second and said, "Speed, what makes Savoy dancers different is they can dance so much faster then any other dancers. It natural, it is what we worked on to be the best...and we had the bands to do it!"


Then she did probably single best exercise I've ever seen. 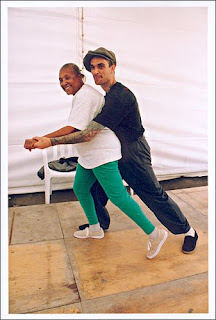 She had everyone stand up, she motioned for me to put on a fast song, I can't remember what song it was but it was pretty fast like "Clap Hands here comes Charlie", she told every to get up on their toes and run in place to tempo.

Once everyone seemed to be doing this, the class looked around at each other in approval, but then Sugar said, ok good that's your time, now lift your KNEES!!!

She exclaimed this is easy to keep time, with little steps on your toes, but now she made everyone put their hands out front palms face down about waist high, and made them lift their knees and hit the hand, meaning high enough that your thigh is parallel to the floor.

I tried it, and found it very difficult...although, i could dance these tempos this exercise helped a lot, not only in building the proper muscles but also being aware of consistency and control in movement. Lindy Hop as done by the best performers was in fact most incredible to see how extended the body can get and yet, still contract fast and get your feet back under you quick enough to stay on tempo.

Yes, it's a workout...that's what dancing fast is, especially if your trying to Lindy Hop or Shag.

So I recommend making a CD to practice dancing too, with Fast music and dance to it every day by yourself for 10 to 20 minutes.

As one old timers used to tell me, "if you can't dance it alone, what on earth makes you think you can do it with someone else.."

Those words couldn't be more true...jassdancer
Posted by the Jassdancer at 3:29 AM